Background: NGF deficiency is one of the reasons for reduced β-cells survival in diabetes. Our previous experiments revealed the ability of low-weight NGF mimetic, GK-2, to reduce hyperglycaemia in a model of advanced diabetes. The increase in DNA damage in advanced diabetes was repeatedly reported, while there were no data about DNA damage in the initial diabetes.

Aim: The study aimed to establish whether DNA damage occurs in initial diabetes and whether GK-2 is able to overcome the damage.

Methods: The early-stage diabetes was modelled in Balb/c mice by streptozotocin (STZ) (130 mg/kg, i.p.). GK-2 was administered at a dose of 0.5 mg/kg, i.p., subchronically. The evaluation of DNA damage was performed using the alkaline comet assay; the percentage of DNA in the tail (%TDNA) and the percentage of the atypical DNA comets (“ghost cells”) were determined.

Results: STZ at this subthreshold dose produced a slight increase in glycemia and MDA. Meanwhile, pronounced DNA damage was observed, concerning mostly the percentage of “ghost cells” in the pancreas, the liver and kidneys. GK-2 attenuated the degree of hyperglycaemia and reduced the % of “ghost cells” and %TDNA in all the organs examined; this effect continued after discontinuation of the therapy.

Conclusion: Early-stage diabetes is accompanied by DNA damage, manifested by the increase of “ghost cells” percentage. The severity of these changes significantly exceeds the degree of hyperglycaemia and MDA accumulation. GK-2 exerts an antihyperglycaemic effect and attenuates the degree of DNA damage. Our results indicate that the comet assay is a highly informative method for search of antidiabetic medicines. 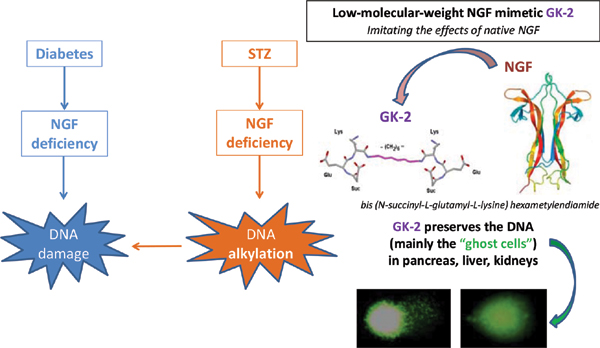